In August 2008 I visited Wateron Lakes National Park in Alberta, Canada. Waterton Lakes and Glacier National Park in the US join to form an International Peace Park which is also an UNESCO World Heritage Park and Biosphere Reserve. These parks have fantastic scenery and biodiversity, truly inspiring to visit. 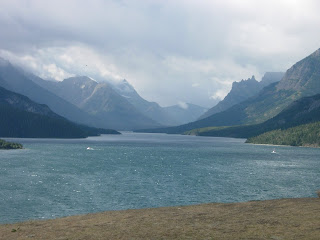 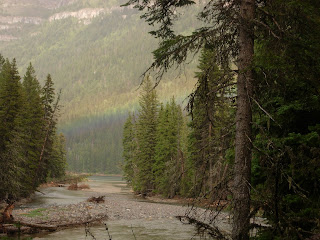 Photo taken at end of "Peace Park" hike, a ranger led hike that starts in Canada and ends in the US.
Further north in Alberta, operations are underway to extract oil from Oil Sands. There is a huge deposit of oil in these sands. Extraction of the oil is inherently inefficient, requiring an input of ~50% of the energy available in the extracted oil and huge amounts of water, yet extraction from these deposits accounts for almost 50% of the total Canadian oil production. Pop Quiz: What country is the top importer of crude oil to the US? (Saudi Arabia, Russia, Canada?). Here is what the operation looks like: 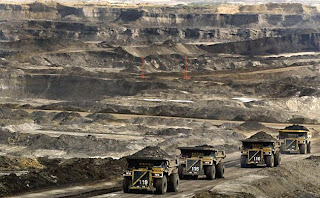 Photo Credit: Jeff McIntosh/AP
Here is what some Canadians think about this great boom to the economy:

For another viewpoint, with essentially the same facts, see the Alberta Government's page on Oil Sands . One of the more sobering facts offered by the government on this site is the following:
"Mineable bitumen deposits are located near the surface and can be recovered by open-pit mining techniques. For example, the Syncrude and Suncor oil sands operations near Fort McMurray, Alberta, use the world's largest trucks and shovels to recover bitumen.
About two tonnes of oil sands must be dug up, moved and processed to produce one barrel of oil."
I wondered, what do we get for our willingness to scrape up two tonnes of the earth. One barrel of crude oil is 42 gallons, which yields approximately 19.5 gallons of gasoline. This would fuel a Prius approximately twice, at 45 miles per gallon would allow a trip of approximately 875 miles, equivalent to a round trip between Boston and Baltimore. Driving an SUV or a vehicle averaging around 20-25 miles per gallon, you would only have enough for a one way trip. To get home, a second two ton scoop would be required.
Top importer of oil to United States: CANADA, by a wide margin.
CANADA - 1,910
SAUDI ARABIA - 1,519
MEXICO - 1,180
VENEZUELA - 1,037
NIGERIA - 941
IRAQ - 652
1000's of barrels/day, source: EIA Figures through Oct 2008 (Energy Information Administration, Official Energy Statistics from the US Government)
Please conserve and support alternatives to Oil!
Posted by JTSvino at 8:35 AM