"Because it helps you build up a relationship to the earth in a mysterious kind of way ..."
On Saturday morning December 5, ~30 people gathered at Bellevue Pond in the Middlesex Fells for a Geology Hike sponsored by the Friends of the Fells and led by Ed Myskowski of the Peabody Essex Museum. Ed is friendly and knowledgeable, happy to share his considerable insight into the geology of New England. Before setting out he covered the basics of plate tectonics and the effects of glaciers on the New England landscape. He even delved into recent theories proposing that periodic variation in the earth's tilt (varying between 21-24 degrees, with a period of 40,000 yrs) is responsible for the historical cycles of glaciation observed (~100,000 yr period), and discussed possible implications for climate change in the future. Ed is pictured below with a gabbro boulder that seems to have been conveniently placed alongside the pond for demonstration purposes. This type of rock is ~600 million years old, sometimes called "country rock", meaning, a component of the local bedrock. It formed at a time when the continents were still connected in a big land mass (called Pangea). New England was butted up into what is now north-western Africa. 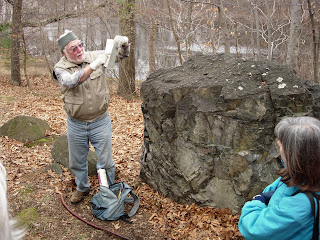 Igneous rocks (from molten magma far below the surface) make up some of the more interesting formations in the Fells. While the varying compositions and formation mechanisms are complicated enough to be the lifetime work of many geologists, their beauty is easy to grasp. Ed told a great story about talking to a group of young school children about igneous rocks. It seemed to Ed their attention was drifting, so he asked "but why should we care about igneous rocks?". A reply came back: "because it helps you build up a relationship with the earth in a mysterious kind of way". I bet Ed felt great about his work with kids on THAT day. 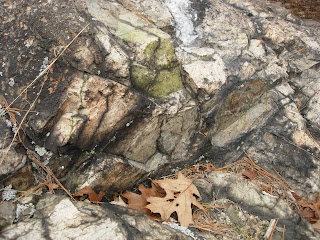 The word "Fells" is an English word for "rocky windblown hills". Formations as shown below give character to the terrain, making for enjoyable hiking. The numerous paths are also favored by runners. 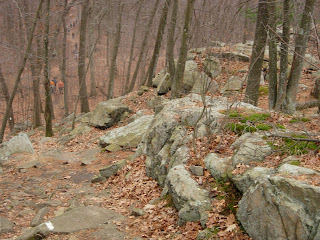 Our hike took us to Wright's Tower on the south-eastern tip of the West side of the Fells. Great views of the Boston Skyline, and the site of the ancient Boston Caldera. (That's another story, that Ed will talk about on February 9 2010, watch the Friends of Fells site for details). 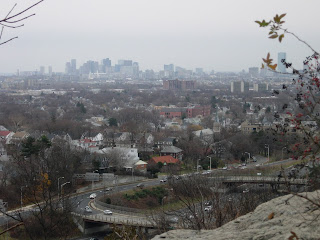 I like the combination of the natural Lynn rhyolite rock feature and the man-made stairs and tower. 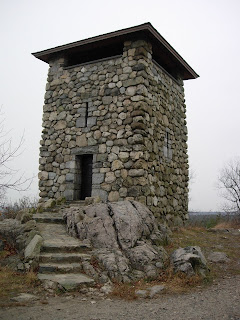 I can almost still see the swirling magma flows in this rock, and the glacial scratches. 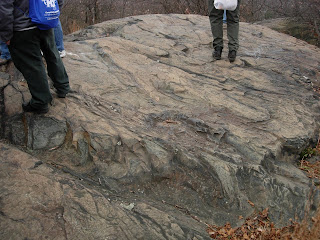 And wow, does it confuse a compass - the white line painted on the rock in the photo below runs North/South. As you can see, the compass points almost due west! 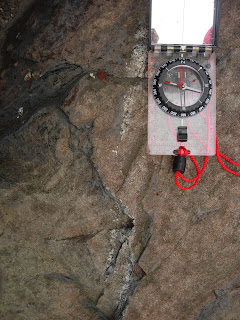 One of the most clear examples of a dike, where magma has intruded into cracks in the bedrock. Some grass has grown where the two rock types meet, providing an even better marking of the division. 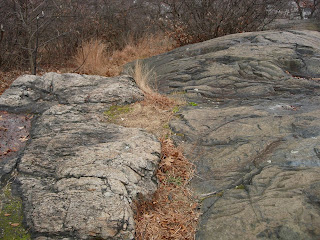 Click on any of the photos for more detail.

Posted by JTSvino at 4:52 PM No comments: